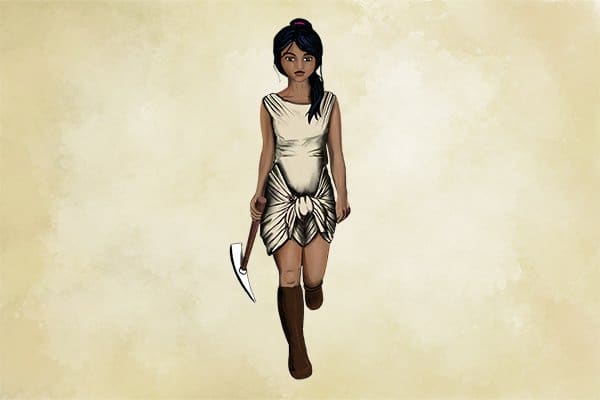 *This post may have affiliate links, which means I may receive commissions if you choose to purchase through my links (at no extra cost to you). As an Amazon associate, I earn from qualifying purchases. Read full disclosure here.
Tweet
Share
Share
Pin
Contents
1 The Traditional View of Proverbs 31
2 What Does “Gird Up Your Loins” Mean?
2.1 What is Proverbs 31:17 Actually Saying?
2.1.1 Context, Context, Context
3 Practically, What Proverbs 31:17 Can Mean for Us Today?

This little ancient phrase appears often in the Bible, including in Proverbs 31. Now, Proverbs 31 has often been used to promote a traditional view of Biblical womanhood. But the use of “gird up our loins” in verse 17 of Proverbs 31 kind of flips that view on its head.

So what exactly does “gird up your loins” mean and why does its inclusion in Proverbs 31 change the Biblical definition of womanhood?

The Traditional View of Proverbs 31

In Christian literature, the images of the Proverbs 31 woman that I often see depicted are ones that are reminiscent of a 1950s housewife. She is elegant, manages her house well, and her husband rejoices to see her when he comes home from work.

She is perfectly poised, everything is always in place. And although there are elements of truth in that narrative, it glosses over some other characteristics found in Proverbs 31 that turn that image right on its head. And that is exactly what Proverbs 31:17 does.

What Does “Gird Up Your Loins” Mean?

The key to this verse is in the phrase, “She girds her loins.” If you are reading the ESV, it is translated as “she dresses herself with strength,” (which I personally think is an injustice to this verse), but the Hebrew literally says, “she girds her loins.” That phrase refers to the act of rolling up one’s tunic (the common clothing for men and women at the time) and tucking it under a belt or tying it in a knot.

A person would do this to get the tunic out of the way and be able to have freedom of movement. Men would typically gird up their loins if they were getting ready to engage in battle, travel long distances, partake in strenuous running (as Elisha did in 1 Kings 18:46), or perform hard labor. Biblically the phrase is used literally and figuratively.

What is Proverbs 31:17 Actually Saying?

The Bible uses “Gird up your loins” usually to refer to men. One of my favorites is when God tells Job in 38:3 “Gird up your loins like a man.” God is basically telling him, “Get ready to fight me” (figuratively). But here in Proverbs 31:17, God uses it to describe this remarkable woman. I have often seen this verse interpreted to mean that a woman should be strong in character, emphasizing a figurative meaning instead of literal.

The Bible does use the phrase figuratively referring to people getting ready to do something bold, courageous, or something that takes emotional, mental strength like in Job 38:3. But that is not the case in Proverbs 31:17 if you consider the context.

The Bible is not using this term figuratively because the phrase, “She girds her loins with strength” is immediately followed by, “(she) strengthens her arms.” And the verse before it talks about her buying a field and “with the fruit of her hand she plants a vineyard.” No, this verse is talking about actual, physical labor.

I think that the tendency to interpret verse 17 figuratively instead of literally illuminates how uncomfortable we yet are in certain Christian circles with seeing women engage in arduous labor. We assume that God must mean that this woman’s strength is emotional because we can’t bring ourselves to believe that He may actually be talking about physical labor and physical strength.

I have also seen commentaries making the case that this verse must refer to a woman keeping her body physically healthy (in other words, not letting herself become overweight). And although I am a big proponent of being good stewards of our bodies, I could not disagree more as it pertains to this verse. When we make that interpretation, we are superimposing our own thoughts and cultures to Proverbs 31:17. There is just no Biblical or historical reference that I could find that supports that.

Relevant Article: What is a Woman’s Role? Defining “Help Meet”

The interpretation as a physical action is in line with the context of the rest of Proverbs 31. Verses 10 through 31 paint a woman who is not lazy, but willing to do what is physically necessary. It is also in line with the overall meaning of the word “chayil,” the Hebrew word translated as “virtuous” in Proverbs 31:10.

“Chayil” a word that for reasons I cannot comprehend was translated as virtuous only in reference to women but in every other case in the Bible, it is translated as “army,” “man of valor,” “host,” “forces,” “strength,” “riches,” etc. You get the idea. (You can read my full analysis in, The Proverbs 31 Woman: Woman of Valor)

Practically, What Proverbs 31:17 Can Mean for Us Today?

Yes, Proverbs 31:10-31 is talking about a woman who is obviously strong in character, but she is also not afraid to be strong physically. What does this mean for us modern women in a practical sense? There is the obvious answer. Don’t be afraid of physical labor. Be willing to get your hands dirty, but I think we can take it a step further.

This verse gives us the freedom to not be conformed to a cultural stereotype of what a woman should be. Proverbs 31 is a woman that is praised by God, something to strive for. She is a woman that wears many hats. Sometimes she is doing some very “lady-like” things and other times, she engaging in the “business of men.”  Sometimes she is not very lady-like at all.

The Proverbs 31 woman is a woman that wears many hats. Sometimes she is doing some very “lady-like” things and other times, she engaging in the “business of men.” Sometimes she is not very lady-like at all Click To Tweet

Think about this woman in Proverbs 31:17 that has girded up her loins. Her hair will be out of place. Her dress will no longer be beautifully flowing. She will be dirty. She will be sweaty. She will essentially be dressed like a man, arranging her clothes to give her the freedom of movement she needs to get things done. But in this state, she is still a woman. She is still loved by God and she is praised because she fears the Lord.

Your opinions and thoughts matter to me! Please comment below.

Lessons from a Prophet on Finding Your Purpose