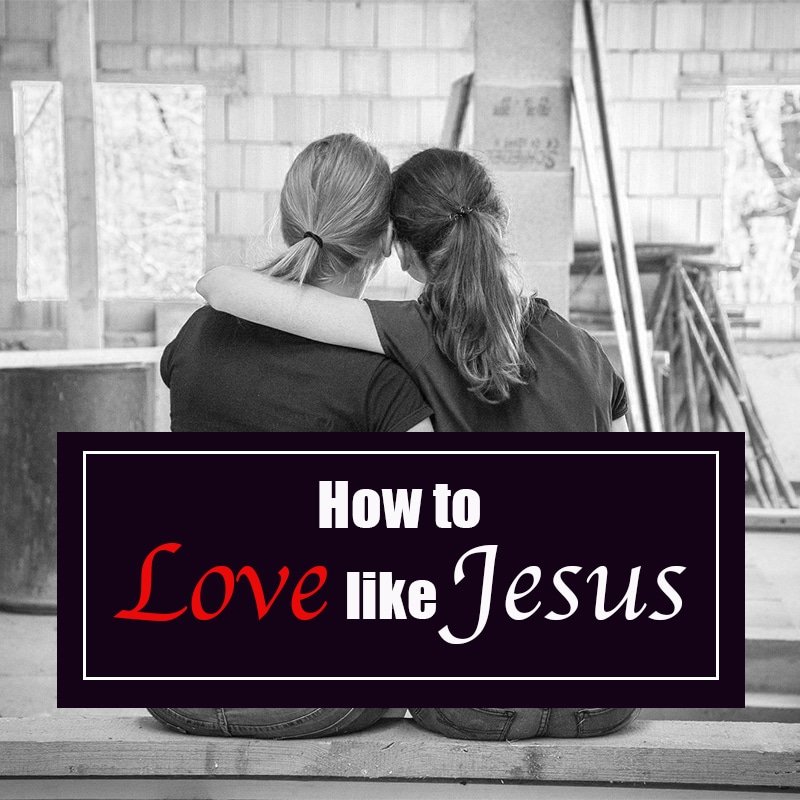 *This post may have affiliate links, which means I may receive commissions if you choose to purchase through my links (at no extra cost to you). As an Amazon associate, I earn from qualifying purchases. Read full disclosure here.
Tweet
Share
Share
Pin
Contents
1 What does it mean to be pharisaical?
2 What does it mean to be permissive?
3 Is there a happy medium between being pharisaical and being permissive?
4 How can we learn to love like Jesus?
5 To love like Christ is not easy, but it is what we are called to do.

What does it mean to be pharisaical?

Pharisaical comes from the word Pharisee. The Pharisees were a powerful minority within the Sanhedrin (the ruling body in Jewish society) during Jesus’ time and the early Church. Jesus criticized them, often calling them hypocrites and claimed that their strict adherence to the law was without “justice, mercy, nor faithfulness.” See Matthew 23:23. The Pharisees were key figures in conspiring to crucify Jesus and were sadly blinded by their own self-righteousness, unable to see the only One that was perfectly righteous.

In today’s Church, what does it mean to be pharisaical? To command strict observance to religious conduct without mercy or kindness. It also means to be hypocritical and to easily point out the faults of others without considering one’s own sin. I will be the first to admit that during the first two decades of my Christian walk, I was pharisaical. I was incredibly judgemental and criticism was always at the tip of my tongue, particularly in areas that were not a struggle for me. And yet there were sins that I was committing, that I kept hidden, or that I justified to myself.

One of the easiest ways to self-test if we are being pharisaical is to ask ourselves if we are approachable? Would people come to us and talk about the sins they struggle with? Would an alcoholic tell us they had an alcohol problem? Would someone admit to us that they were pregnant out of wedlock? Or would they come to us if they suffered from same-sex attraction? If people don’t confess their sins or talk about their deep-seated issues with us, maybe it is time to ask why.

I know I used to not be approachable. Even my own extended family was afraid to tell me anything out of fear of how I would react. God, in His mercy, humbled me and made me feel the pain of shame. It changed my outlook on how I saw people and their sin and I am forever thankful. I still struggle with pharisaical attitudes, but I can now recognize it in myself, and that allows me to every day become a little more like Jesus.

What does it mean to be permissive?

On the other end of the spectrum is permissiveness. Permissive Christians will not speak up if they see something that is not right. They are either afraid of the criticisms they will receive if they call certain behaviors sin or they treat grace too loosely. That means that they justify behavior under the umbrella of grace with little effort at self-control.

These are also Christians that will change doctrine to appease current cultural norms. They are afraid of confrontation so they don’t want to stir the pot. They would rather compromise the truth of God’s word than stir up trouble in their neighborhoods or communities.

Is there a happy medium between being pharisaical and being permissive?

The short answer is YES! I saw this most recently displayed in my twelve-year-old daughter with an incident she had with a friend. Through it, she taught me that the happy medium is to love like Christ.

My daughter had a tigh-knit group of friends in elementary school. Many have known her since pre-K and many are not Christian. However, her friends know that she is being raised in a conservative Christian tradition. For example, we don’t celebrate Halloween. For years they have seen my daughter not attend Halloween parties and not participate in the school’s Halloween activities. However, they know it is more than her being raised this way. She believes this. They have witnessed her take a stand against evolution and have deep conversations about her Christian faith with fellow friends who are atheists. So when one of them was struggling with feelings that most Christians would find repulsive, it would seem that my daughter would be the last person she would tell.

That is not what happened at all. My daughter’s friend chose to confide in my daughter first even though she knew that my daughter would be against the behavior. My daughter’s response to her friend was something to the effect of, “I believe that is sin, but I am not going to stop being your friend. As your friend, I will not condone it, but I love you and will continue to always love you.” I know those were not her words exactly, but what I do remember is the love, care, and compassion towards her friend as she was relaying the story to me.

Relevant Article: Pro-Lifers, Are You Pushing Women Away From the Gospel?

My daughter recalled the incident recently. She asked me, “Mom, I don’t understand why my friend told me first even though she knew how I would feel about it as a Christian. She could have told one of our other friends who are not Christian.” However, I knew the reason why. My daughter and this friend had a long history which included my daughter forgiving her multiple times. Even though her friend knew where she stood, she came to my daughter first because that is where she found unconditional love. And that is the love of Christ. To stand firm on your beliefs, to be able to call sin a sin, and yet to do it with so much love and compassion that someone knee-deep in sin will still come running to you.

And that is the love of Christ. To stand firm on your beliefs, to be able to call sin a sin, and yet to do it with so much love and compassion that someone knee deep in sin will still come running to you. Click To Tweet

The best way to learn to be neither pharisaical nor permissive and to love like Christ is simple, study the life of Jesus. Read the gospels. If you do you will find so much wisdom on how Jesus treated people. For example, make a list of who Jesus spoke harshly to? Usually, it was the Pharisees and those who had been his disciples for some time. Who was he the most gentle with? Generally, those living in sin like tax collectors and non-Jews like the woman at the well.

Why the distinction? I think the answer is found in Matthew 23:13 when he says, “But woe to you, scribes and Pharisees, hypocrites! For you shut the kingdom of heaven in people’s faces. For you neither enter yourselves nor allow those who would enter to go in.” Hypocrites and self-righteous attitudes push people away from the gospel, not towards it. It is not a light matter to push people away from Jesus, to be responsible for them never gaining eternal life in His presence. So when Christian behavior and attitudes are clearly pushing people away, those are the people we need to take a harder line with because too much is at stake. People’s eternal life is at stake.

On the other hand, when someone who is not even saved is embroiled in sin, we need to take a much softer approach. We need to show compassion and love. We need to first help them feel wanted, loved, and with time we can disciple them and help them grow out of the sin through the power of the Holy Spirit. If you are having a hard time being compassionate to the struggles of others, then I would suggest spending some time trying to truly understand the sacrifice that Jesus made.

In showing compassion, does that mean that we tell people that what they are doing is okay? No, of course not. That would be permissiveness. Again, looking at the example of Jesus, he was direct with the woman at the well, but only after he made a bold counter-cultural statement. To understand the level of kindness in that statement and the effect it had on the woman, I suggest reading, When Jesus Broke Racial Barriers: the Woman at the Well. We must always stand firm on our faith, but we can do so while being loving and kind.

While showing the love of Christ, does that mean that we will never have opposition? We know we will always encounter persecution and opposition. Jesus certainly did and he was perfect. However, pharisaical Christians tend to justify the rejection of their attitudes by calling it persecution or opposition to the truth. We have to be careful to discern whether the opposition and rejection we are experiencing is a true rejection of the gospel or rejection of our own self-righteousness and hypocrisy.

We have to be careful to discern whether the opposition and rejection we are experiencing is true rejection of the gospel or rejection of our own self-righteousness and hypocrisy. Click To Tweet

To love like Christ is not easy, but it is what we are called to do.

I have to admit I have yet to master the art of loving like Christ. There will be times when I will be tired and hungry and be unkind to the cashier (and I will feel horrible about it afterward). And there will be times, when I just don’t want to feel rejected and I will be permissive. Our Christian walk will never be perfect, but every day we have to get up and keep on walking. What is important, however, is to begin to recognize pharisaical and permissive behaviors in ourselves. In doing so we gain spiritual maturity and we become more successful at reaching the lost.

Pro-Lifers, Are You Pushing Women Away From the Gospel?

Self-Cutting: Why People Do It and How To Help Them?