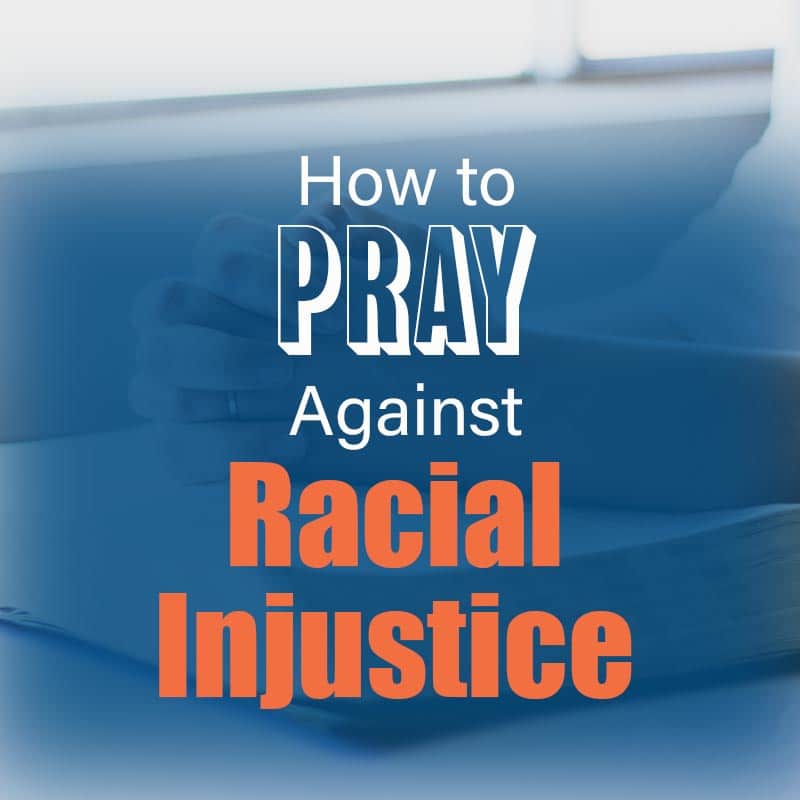 During times like these, there is a lot we could do and should do and there are lots of resources out there on how we can actively fight against racial injustice in a godly manner. We have to be active participants in racial reconciliation and part of that may begin by being honest about our roles in all of it. I want to encourage you to seek out resources on tangible things that you can do. But one thing we know never fails is prayer. For that reason, I wanted to provide some guidance and prayer points to help us pray against racial injustice. Always, let the Lord lead you, as there may be things we should be praying for that is not in this prayer guide, but feel free to use it as a starting point.

Praying for the Country’s Leadership

Open the eyes of leaders to see that they need to take visible, active action towards institutional change. Give them ears to hear the grievances of those protesting and establish a plan of action the addresses those grievances.

I pray that godly wisdom will prevail and that people of godly integrity will have the boldness to be a voice for change. Father, put people in power that have a true heart for unity and for establishing your will and remove those from power who don’t.

Praying for Laws to Change in Favor of Racial Equality

Lord, we pray that laws and other fundamental structures within the government that are biased against people of color will be exposed and removed. Father, may your Holy Spirit find its way into our court system, the prison system, legislative systems, and other government institutions and open the spiritual doors for change. I pray for laws that will provide equal opportunities for all and laws that will help those that have been oppressed or disenfranchised and stuck in a cycle of poverty or injustice. May you place people of integrity, enlightened by your Word, that can make these changes possible.

Lord remove any spirits of oppression and confusion from all government institutions. Remove any spiritual elements whose goal is to steal, kill, and to destroy.

Relevant Article: The Woman at the Well, A Study on Racism

Lord, I pray for local government leaders to have the boldness to be present during these times of chaos. Give them ears to hear and listen to the voices in their communities. Father, raise leaders within local government that have a heart for godly change and are committed to institutional change. I pray that you will remove any government leaders that have racist tendencies and who are entrenched in their own ways unable or unwilling to listen to reasonable requests.

Father, I pray for the African-American community and all other communities that have suffered injustice. I pray that you may heal their hearts and their pain. I pray Lord, that the Great Comforter, will comfort their broken hearts. I pray against the spirit-of-fear that wants to take hold of their community. I pray that their voices will be heard. I pray their girls will see themselves as beautiful and precious in your sight. I pray their boys will recognize your handiwork in their lives. I pray that as a community they will flourish and thrive financially and as a culture and be passionate spokesmen for your word. I pray that you protect them from racial injustice. Protect their businesses from financial ruin and protect them from harm. I pray that you grant the leaders in their community godly wisdom to lead and love them well.

Praying for our Youth

Father, we pray for the heart of our youth. Use their energy and passion to be agents of change in a godly manner. Help them resist voices that seek to use them for their own ends or seek their destruction. Give them hope, hope rooted in Christ. Show them opportunities to thrive and fulfill the callings for which you have created them. Raise leaders among our youth who are full of wisdom, boldness, and courage to promote racial equality in a way that is rooted in Christ.

Father, I pray that police forces across the nation will have the humility to take constructive criticism and that leadership will have the courage to dismiss officers that are less than professional, that are criminal, or that show racist tendencies. I pray that its leaders make the institutional changes necessary to promote equal and professional treatment of individuals. I pray police officers who witness evil or unprofessional behavior will have the courage to make a change. May you break any ungodly “brotherhood” attitudes that protect individuals that should be brought to justice.

May you bless and protect those officers who abound in love, peace, and compassion and have behaved professionally in the communities they serve. May those kinds of officers multiply and radically replace any evil elements. May you protect them always.

So we come against the demonic forces fueling racial attitudes and strife. We know we don’t wrestle against flesh and blood, but against principalities, against powers, against the rulers of the darkness of this world, against spiritual wickedness in high places as it says in Ephesians 6:12. We pray against those principalities and stand against those powers with the truth of your word, with the belief that salvation came for all, trusting in a righteous cause, using your word to fight our battles and charging forward with the gospel of peace.

Father, I pray against rebellious spirits that want to take advantage of the pain within the African-American community and other disenfranchised communities to stir up strife and division. I pray against organizations that are trying to use peaceful demonstrations for their own criminal ends that run contrary to a message of racial justice. We pray specifically against rebellious spirits that are stirring up discord among kids and teens trying to put them in harm’s way.

Lord, we pray against white supremacist groups, especially white supremacy groups, that have perverted your word to achieve their own ends. I pray against the hatred that dwells in their hearts for people of color or anyone who doesn’t look or act like them. I pray against their arrogance to think or believe they are above any other one of your image-bearers. Lord, we know that you resist the proud and give grace to the humble. We walk in that promise Lord that you will resist their efforts, but give grace to those humbly walking for unity.

Prayer For Our Own Hearts

Father, I pray for my own heart and mind. Search me out, Lord, and convict me of any wrongdoing. Show me where and how my thinking is flawed. Help me, Lord, to be slow to speak, but quick to listen to the pain and hearts of others. Remove any arrogance on my part or any efforts to intellectualize what is a matter of the heart. Give me the eyes and the mind of Jesus to understand those that think differently than me in a way I have never been able to before. Enlighten me, Lord, and reveal your will to me. Show me how I am to be an agent of change towards racial reconciliation.

Prayer for the Church

Finally, Lord, I pray for your church. We are to be ambassadors for Christ, but we have failed miserably in so many areas. Forgive us, Father, for our shortcomings and arrogance. Forgive us for the divisions found within our church and allowing cultural biases to dominate our decision-making. Father, remind us daily that we are to conform to the cultures and peoples around as Paul taught us in I Corinthians 9:19-23. Not the other way around. This is especially true, Lord, among the white Church who has a long history of wanting other cultures to conform to its own. Help us, Lord, clearly discern the difference between cultural decisions and what is the uncompromisable truth of your word.

Relevant Article: The Lack of Cultural Diversity in Christian Media

I pray for boldness and wisdom within the church to be active participants in this discourse. Let us, as a church, be agents of change within our communities lobbying for equal and fair treatment for all and being a voice for all injustice. I pray against any spirit of offense within the church and instead for us as Christians to follow the example of Christ who, being perfect, still kept silent in the midst of accusations. I pray against the tendency to want to protect our own and instead give us the boldness and willingness to risk all for Christ’s sake. I pray for a united church, for a multicultural church, for a church genuinely representing our Lord Jesus Christ.

Because Girls are Warriors Too!

How to Pray for a Pandemic