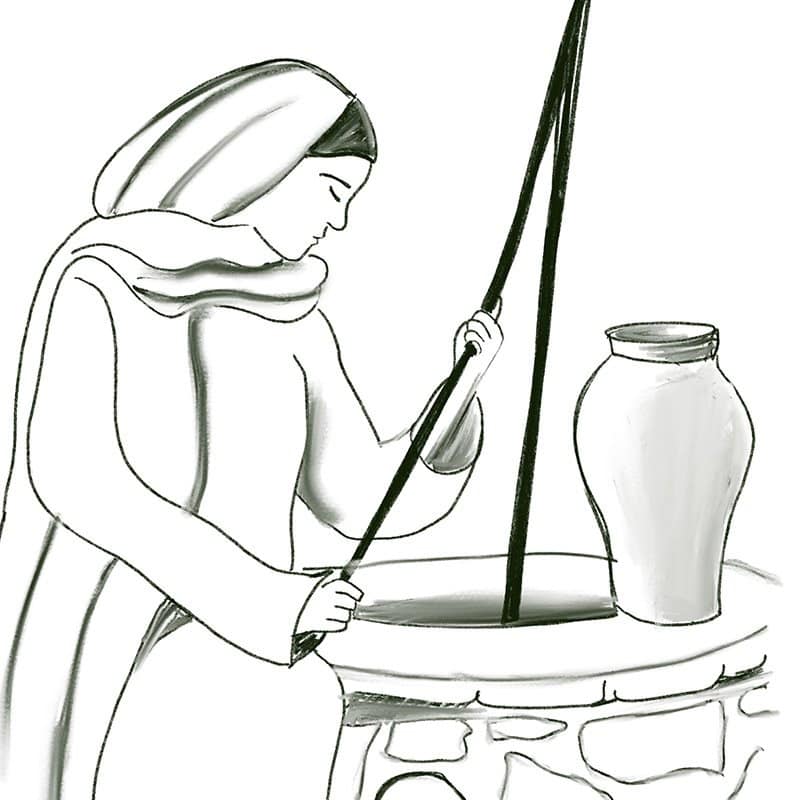 Tweet
Share
Share
Pin
Contents
1 What are the Racial Elements in John 4?
1.1 The Samaritans Were Racially Intermixed
1.2 Racist Practices by Jesus’ Contemporaries
2 Jesus Crushes the Racial Barriers
3 How Can I Apply The Account of the Woman at the Well to My Own Life?
3.1 Questions For Self-Reflection

Is the account of the “The Woman at the Well” really about racism?

It is about a lot of things, but there is definitely a lesson or two about racism.

“Racism” is a modern word. We often miss modern applications because we do not see our modern words in the text. That is exactly what has happened with the story of the Samaritan woman at the well in John 4:1-42. However, by taking a closer look at the historical context, we will see that this is indeed a story of racism in Bible times and how Jesus broke through those racial barriers.

Don’t Miss Out on Our “WOMEN IN THE BIBLE: Untold Stories of Old Testament Heroes” Series!

What are the Racial Elements in John 4?

I have read this section of scripture many times and I have generally focused on the words of Jesus introducing salvation to a Samaritan woman at a well. It is a beautiful story, but my previous casual reading of this text made me miss what is buried in these ancient words. But that changed recently when I was given the opportunity to teach this account to the youth group at my church.

About a year ago, I came across a little paragraph in my Chronological Bible that discussed some of the cultural realities of the time and I remember being blown away by how Jesus was turning the prevalent sexism of his time on its head (you can read about it in How Jesus Empowered Women). But it was only recently, in preparing to teach the youth, that the racial aspect of this account jumped out at me.

The Samaritans Were Racially Intermixed

To understand the text, we have to get a clearer picture of the historical context, specifically the racial realities of Biblical times. When Jesus was walking on this earth, there already was a centuries-old feud between Samaritan’s and Jews. This feud fueled racist attitudes.

The genesis of the feud can be traced back to when the Israelis were taken captive by the Assyrians in approximately 722 BC. Their captors brought in colonists who intermarried with the few Israelis that had been left behind. This intermixed group of people would later be known as the Samaritans.

Relevant Article: The Lack of Cultural Diversity in Christian Media

Fast forward over a hundred years later, and a remnant of full-blooded Jews had been allowed to return to their homeland by the Babylonians. This group of full-blooded Jews and their descendants came to despise the Samaritans. They resented the fact that these Samaritans were now racially and religiously intermixed. (For a little more detailed history of this conflict read here.)

Enter Jesus and the Samaritan woman 700 plus years later. Jesus was a rabbi, and rabbinical standards of that time dictated that any “good” Jew would go nowhere near a Samaritan. Why? Because Samaritans were considered “half-breeds.” When I asked my youth group class what that sounded like using modern terms, a very perceptive junior high student responded, “racism.”

The most “religious” of Jews hated Samaritans so much that if they needed to travel between Judea (in the south) and Galilee (in the North), they would travel west into Perea. This would allow them to completely go around Samaria which was sandwiched in between Judea and Galilee. Considering that travel time by foot was about two and a half days from Judea to Galilee, a detour of that magnitude was very taxing. The hate ran deep.

Another common belief by religious Jewish leaders at the time was that anything a Samaritan touched was unclean. That means that drinking out of the same vessel as a Samaritan would have been unthinkable. When I reflected on this practice, I could not shake the parallels to the American segregation era when African-Americans were not allowed to drink from the same water fountains as whites. Yes, the prejudices against the Samaritans can only be described as good old fashioned racism.

But what does Jesus, the rabbi do? For starters, he didn’t take the long route through Perea to get from Galilee to Judea. He went straight through Samaria. The text actually said that he needed to go through Samaria and many Biblical commentators rightly point out, I believe, that the need was a spiritual one. He had a divine appointment, even if the intended party had no idea what awaited her.

The account says that he reached the Samaritan city of Sychar and he sat at the well and asked the Samaritan woman for a drink. With the simple words, “Give me a drink,” Jesus broke down centuries of cultural, social, and racial biases. Why? Because by asking the woman for a drink, the King of kings was telling the woman, “I am willing to drink out of the same vessel as you because to me, you are not unclean, you are worthy.”

Relevant Article: How to Pray Against Racial Injustice

Obviously, none of us are worthy. We all have fallen short of the glory of God. Our worthiness comes from Christ alone and as He proceeds to talk with the Samaritan woman, he invites her to drink from His living water to eternal salvation. But his actions stand in stark contrast to the corrupted doctrines and biases of the religious leaders of his time. No wonder the Pharisees hated Him so much, but Jesus would have none of it.

If anyone had any right to feel superior to any other human being, it would have been Him. And yet, He did not act superior. A couple of years later in the ultimate act of humility, he would die for all of us, for all races and ethnicities, even for those that hated Him the most.

In this beautiful account of the woman at the wall, the actions of Jesus are a good reminder to all of us that we have to check our own prejudices and biases at the door when interacting with others. There is no room for racism in Christianity. On the contrary, Christianity is about love, love for even those we consider our enemies.

In this beautiful account of the woman at the wall, the actions of Jesus are a good reminder to all of us that we have to check our own prejudices and biases at the door when interacting with others. Click To Tweet

How Can I Apply The Account of the Woman at the Well to My Own Life?

We all have ingrained prejudices and stereotypes whether we like to admit it or not. Having been a very light-skinned Hispanic who speaks fluent English, I was ignorant of the prejudices that many people deal with on a day to day basis.

However, having married a dark-skinned Puerto Rican that looks Middle Eastern and having a daughter with darker skin than myself has opened my eyes to things I had not seen before. I have seen my husband “randomly” picked for extra security checks at the airport. I have gritted my teeth as other Latin Americans have commented on how beautifully white my youngest daughter is in the presence of my dark-skinned older daughter. These are a few examples and although disturbing, they pale in comparison to what other people of color have experienced.

So as we meditate on this account of the woman at the well, let’s take some time to reflect on the stereotypes, biases, and even racial attitudes that we may have. I suggest taking some time to pray and ask God to bring to mind answers to the following questions.

How do these stereotypes, biases, and racist attitudes keep me from showing the love of Christ?

Do I associate mostly with people of my same socio-economic class? Race? Culture?

What can I do to expand my circle of friends to include people from other cultures, nations, races?

What can I do to learn more about the struggles of different groups of people within my town, city, state, or country?

How can I use what I have learned about Jesus and the woman at the well on how I should interact with people that are different than me?

I leave you with one final note from Galatians 3:28.

If you want to learn one simple thing that you can do to make a difference in your church or in the images you use at home, check out my blog, The Lack of Cultural Diversity in Christian Media.

Don’t Miss Out on Our “WOMEN IN THE BIBLE: Untold Stories of Old Testament Heroes” Series!

How Did Jesus Treat Women?

Women in the Bible: Untold Stories of Old Testament Heroes