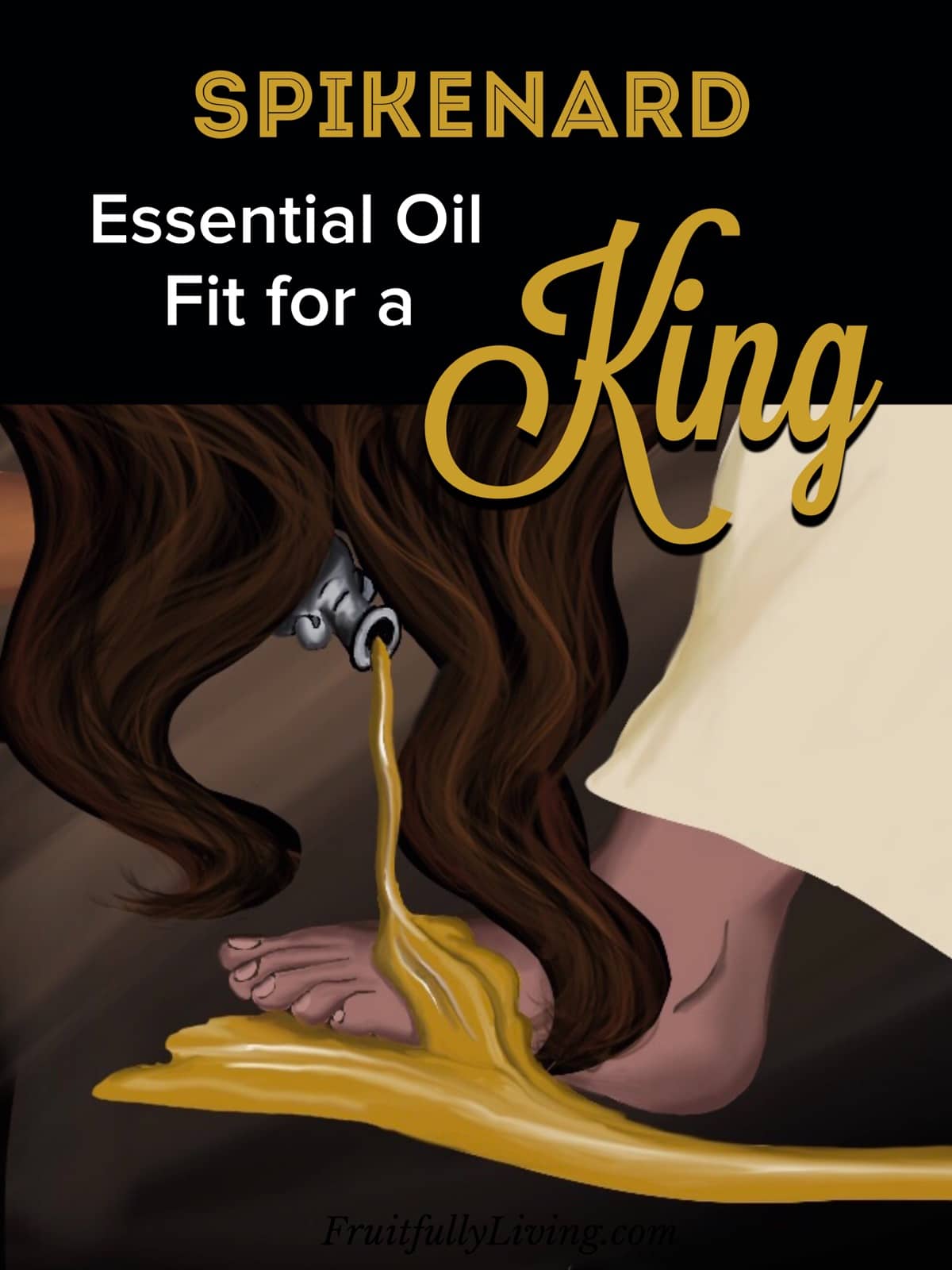 Tweet
Share
Share
Pin
Contents
1 The Cultural Significance of Spikenard, Reveals the Wisdom of One Woman’s Actions
2 Summary of Jesus, Mary, and the Use of Spikenard
3 Spikenard Was Expensive Because It Came From Afar.
4 Mary’s Loving Act Was Intentional and Purposeful
5 Spikenard Could Have Possibly Helped Jesus Relieve Some of the Anxiety Prior to His Crucifixion.
6 How Spikenard Can Be Used Today.
6.1 Benefits of Using Spikenard Essential Oil

Sometimes doing a little bit of research on what may seem like a trivial detail can reveal great Biblical truths. That is what happened when I began to dig into the use of spikenard essential oil in scripture. And in the process, I learned something remarkable about the woman behind the anointing of Jesus!

The Cultural Significance of Spikenard, Reveals the Wisdom of One Woman’s Actions

I love my essential oils. I am by no means an expert on them, but I use them a lot for medicinal purposes, to repel unwanted pests, and just because they smell so good!  You can, therefore, imagine my excitement to find out that the “perfume” Mary of Bethany used to anoint Jesus’ feet was spikenard.

It is an oil you can order right off of Amazon! (Technically, it is not exactly the same, but the raw ingredient is.) More importantly, as I learned more about the properties of this oil I came to have a much greater understanding of its biblical significance and the wisdom of Mary’s actions. This was not a simple woman acting out of pure emotion. Her actions were deliberate and intentional, ministering to Jesus prior to His crucifixion. Something none of his other disciples had been able to do.

This was not a simple woman acting out of pure emotion. Her actions were deliberate and intentional, ministering to Jesus prior to His crucifixion. Click To Tweet

Summary of Jesus, Mary, and the Use of Spikenard

If you are new to this story, let me provide a brief summary.

Jesus is at a dinner with some of his closest friends and disciples. The dinner is being hosted by Mary and Martha a few days before His crucifixion. During the dinner, Mary grabs an expensive “perfume” and pours a good amount of it on Jesus’ feet. Judas (yes the same one that would later betray him) criticizes Mary for her actions and calls her actions wasteful. (Read entire story here in the Biblical record).

In all honesty, when I had read this account before, I had not paid much attention to the type of “perfume” Mary used even though the Bible says it was “made from pure nard” or spikenard. Most of us have heard of myrrh and frankincense (gifts that the Magi gave to Jesus as a young child), but I don’t really think spikenard has made into our everyday language. However, as I was preparing to teach a Bible study to my daughter and her friends regarding this Biblical account, I was compelled to pay attention to every detail. One of those details was the use of the word spikenard.

This was not some simple woman acting out of pure emotion. Her actions were deliberate and intentional, ministering to Jesus prior to his crucifixion. Something none of his other disciples had been able to do. Click To Tweet

Spikenard Was Expensive Because It Came From Afar.

As I poured my energy and time into this study, I wanted to find out what exactly was spikenard, how it was used by the ancients, and what its significance was in the anointing of Jesus.

Spikenard was a highly expensive oil or ointment (as mentioned in scripture and confirmed by outside sources) derived from a plant that was used not only by the Jews, but many peoples from the Middle East and Asia. It was imported from the areas of present-day India, China, and Nepal as the plant is native to the Himalayas. The ancients used it to season food, prepare bodies for burial, medicinal purposes, and as a perfume (See Charles Hatchet, On the Spikenard of the Ancients and Raoul McLaughlin, Rome and the Distant East.)

Jews used it as a component in incense burned at the temple in Jerusalem and apparently to bury their dead. Although I could not find first-hand sources, several online articles mentioned how Jews in Biblical times used it as one of the primary ingredients to prepare bodies for burial along with myrrh.

Because nard was produced as an oil and/or ointment, it would allow more powdery substances like myrrh to stick to the body. In the John 12 account of Mary of Bethany anointing Jesus’ feet with this expensive oil, Jesus himself declares in verse 7 that “she has kept it for the day of my burial” (HCSB version).

Regardless of what it was used for, nard or spikenard was highly valued and used by upper classes, including kings. For example, Spikenard appears to have been the primary fragrance in a perfume found in King Tut’s tomb. Therefore, it is only fitting that such an oil would be used to anoint the feet of the King of Kings!

And if the oil was one of the primary ingredients for preparing bodies for burial, it brings even more significance to the humble act performed by Mary of Bethany. It shows that she knew exactly what she was doing, and she would have been the first of Jesus’ disciple to acknowledge that He was indeed headed to the cross. She had indeed absorbed everything she had learned

(To find out more about Mary as Jesus’ disciple read, How Jesus Empowered Women).

Spikenard Could Have Possibly Helped Jesus Relieve Some of the Anxiety Prior to His Crucifixion.

There is also an interesting correlation between the cross and how this oil is used today. Today, while in hospice care, caregivers will use spikenard to help patients emotionally transition from life to death. Spikenard has been shown to relieve stress and anxiety and therefore calm both body and mind (See OilsandPlants.com and this article). When I read this, it brought my thoughts back to Jesus and what he must have been going through in the days prior to the crucifixion.

We know from the record in Luke 22, shortly before his arrest, that Jesus was in agony over what was to come, enough so that he was sweating blood. If we backtrack only a few days to when Mary anointed his feet and filled the room with the scent of nard, I can only assume that the weight of what was before him was already weighing heavily on Him.

And I wonder, could the nard have been a small detail in how our Heavenly Father (through Mary’s loving action) was helping Jesus relieve some of that anxiety? We won’t know for sure on this side of heaven, but it is a possibility. But even if the scent of spikenard was not physically helping to relieve some of his stress, Mary’s willingness to minister to him in that way certainly was (You can read more about Mary of Bethany in my blog, How Jesus Empowered Women).

How Spikenard Can Be Used Today.

Today, you can find spikenard as an essential oil. It is most likely not in the same form as it was used back in Biblical times as modern distillation processes were not existent (although Hatchet makes a good case that the Indians had a primitive form of distillation that they used to produce the nard ointment/oil).

However, current research, some of which is in line with how the ancients used it for medicinal purposes, shows that nard essential oil can be used for a variety of purposes. Personally, I am just enjoying putting a few drops in my diffuser along with orange essential oil and meditating on the Bible record, but I also wanted to pass along the information below for anyone that might need it.

See these articles below for more information on how to use it. Remember to do your due diligence especially if you are pregnant or breastfeeding when using essential oils.

Spikenard Stimulates the Immune System and Relaxes Both Body and Mind

Here are other articles that help you understand the Bible in the context of its culture:

How to Restore a Broken Mother-Daughter Relationship

How Did Jesus Treat Women?