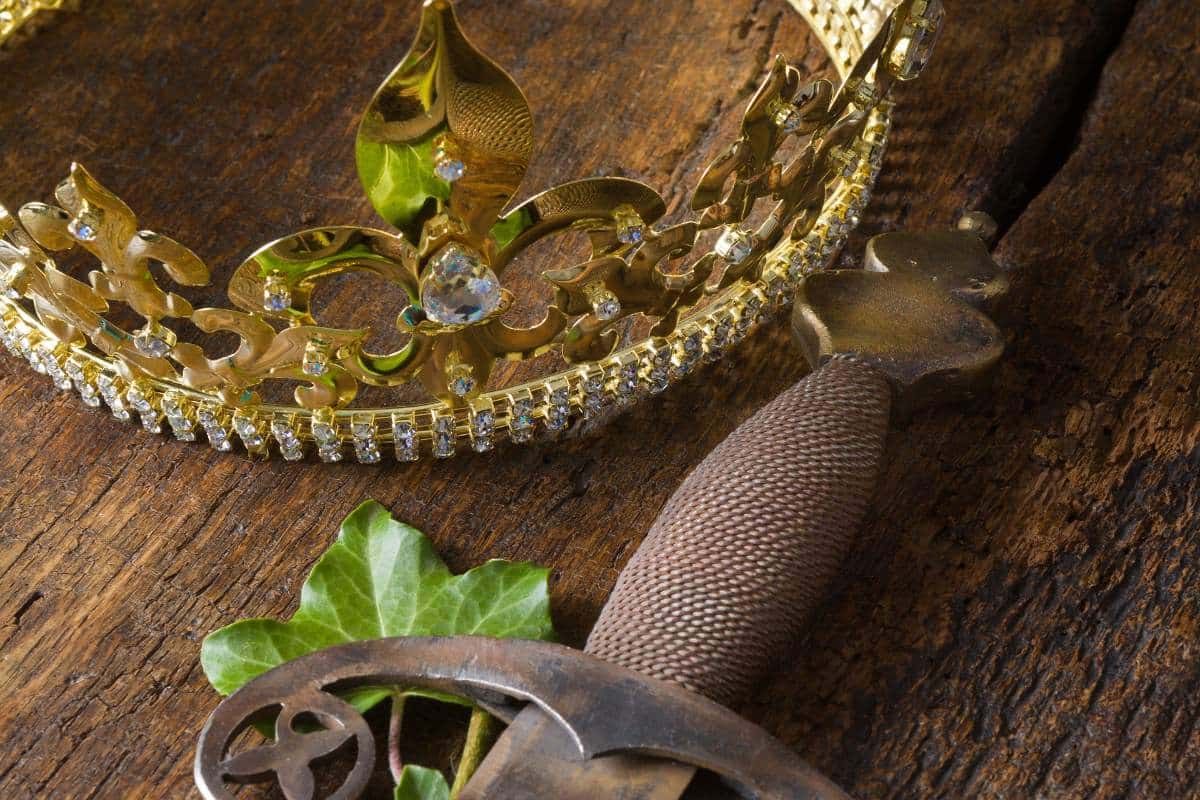 *This post may have affiliate links, which means I may receive commissions if you choose to purchase through my links (at no extra cost to you). As an Amazon associate, I earn from qualifying purchases. Read full disclosure here.
Tweet
Share
Share
Pin
Contents
1 What Esther Endured to Become Queen
1.1 Queen Esther is Forced From Her Home
1.2 Queen Esther is Forced to Have Pre-Marital Sex
1.3 Esther’s “Good Fortune” Must be Understood in the Context of Trauma
2 Esther’s Uncertain Relationship with King Ahasuerus
2.1 Esther Approaches the King Through Formal Process
2.2 Esther Must Approach the King a Second Time Through a Formal Process
3 The Fierceness of Queen Esther
3.1 Esther Requests the Fighting to Continue Into Another Day
3.2 Esther Requests the Hanging of Haman’s Sons
4 The Parallels Between Queen Esther and the Persian Queen Amestris
5 Lessons Learned from the Queen Esther Story
6 Final Thoughts on Queen Esther

The Queen Esther story is my daughter’s favorite biblical account. She is my girly girl so it is not surprising that she would be drawn to this beautiful queen in the Bible. Despite the allure of this story for many young girls, we cannot fall into the trap of thinking that her story is one of romance. Because romance plays no part in it. No, this is a story of courage, faithfulness, and endurance in the midst of horrific circumstances. And while the true Queen Esther story may not play into our love of romance, it has beautiful, real lessons for women in the Christian church.

What Esther Endured to Become Queen

In the first chapter of the book of Esther, the Persian King Ahasuerus dethrones his queen, Vashti, after she rejects his summons (Esther 1). To find a replacement, the king appoints officers across his provinces to gather beautiful women to choose from. This is not a royal invitation to attend a ball so the king can choose his bride. Officials most likely forcibly took these women from their homes and placed them in the king’s harem (Esther 2).

Queen Esther is Forced From Her Home

This is hardly the makings of a romantic love story. Persian officials take a young woman named Hadassah against her will and put her in an environment completely different than the culture she was used to under the care of her uncle Mordecai. She even loses her Jewish name, becomes Esther (Esther 2:7), and conceals her family background (Esther 2:10) presumably for her own protection.

One cannot imagine the despair that Esther must have felt, alone in the harem, away from family and friends, despite the luxuries she would have been entitled to. (The same scenario played out in World War II when a beautiful Jewish girl catches the eye of a Nazi officer and marries him. You can read her riveting biography, “The Nazi Officer’s Wife: How One Jewish Woman Survived the Holocaust.”)

Queen Esther is Forced to Have Pre-Marital Sex

For a year leading up to that fateful day, she was bathed in scented oils and spices (Esther 2:12). Isn’t that every woman’s dream? Except that in her heart she must have known, that each day and each bath only meant she was getting closer to the day she would meet the King. And it is not likely that she relished the prospect. The Bible details what that day would look like for each prospective queen, including Esther.

In the evening she would go in, and in the morning she would return to the second harem in custody of Shaashgaz, the king’s eunuch, who was in charge of the concubines. She would not go in to the king again, unless the king delighted in her and she was summoned by name.

When the text tells us that these women would spend the night with the king, it implies that they had sex with him, and it was not consensual. They submitted to the will of Ahasuerus because of the fear of repercussions. Today, we would call this rape and this was Esther’s fate. She had forced sex with a man who was a stranger, knowing full well, he had just slept with all the other women in the harem.

For the king to choose Esther was the better option of two awful possibilities. The alternative was for officials to send her to another harem and become a concubine like all the other women who did not make the cut. In those circumstances, she would no longer be free to marry or live outside the confines of the harem. But Esther was highly favored, not only by the king but by others she encountered, including Hegai, the keeper of the harem. But being favored is different than being loved. So while she faired better than the other women who ended up as concubines, what she went through was nothing less than traumatic.

As Queen, Esther would have been entitled to a certain level of luxury and privileges. However, one of those privileges would not have been the exclusive love of her king. As was common in that era, a king might have had a queen, but he also had a harem of concubines who he would sleep with as he pleased. Ahasuerus would have been no different and multiple “wives” (even if they didn’t carry the title Queen) and concubines were common.1

In this context, we can understand Esther’s hesitancy in approaching the king when Mordecai asked her to lobby for her people. Haman had contrived a plan to commit genocide against the Jewish population in Persia (Esther 3:6-13). When Mordecai first asked her to speak to the king on their behalf, Esther was hesitant, probably out of fear (Esther 4:11). She reminded Mordecai about the law in the land. Anyone who would approach the king without being summoned would be executed unless he signaled reprieve via his golden scepter.

Esther’s uncertainty about how the king would respond if she appeared at court demonstrates that their relationship was not one born out of love and affection. In verse 11, we find out that it had been 30 days since he had last summoned her. In that kind of relationship, she had no reason to believe that he would be merciful toward her. But he was.

The king clearly delighted in Esther and respected her and listened to her requests. In that first exchange, when she explains to him what Haman had planned, one may get the impression there is a warmth shared between the two of them. Although the king hangs Haman in a fury, he does not actually take care of the real problem, preventing the annihilation of the Jews. Esther must approach the king again via the same formal process (Esther 8:3-4) to beg for her people. There is a clear respect for Esther, but we cannot mistake it for a loving, romantic relationship.

The Fierceness of Queen Esther

In her act of courage to approach the king not knowing her fate, Esther saves her people. That is well-known among Christian circles. What is less known is her fierce, toughened demeanor towards the end of the book.

Esther Requests the Fighting to Continue Into Another Day

Unable to undo his previous decree, King Ahasuerus responds to Esther’s second plea by establishing a new one allowing the Jewish people to defend themselves against their enemies (Esther 8:11). On that day of battle, the Jews are overwhelmingly victorious. Despite their victory, Esther is not satisfied. She asks for the bloodshed to continue into another day and for Ahasuerus to hang the bodies of the sons of Haman from the gallows.

And Esther said, “If it please the king, let the Jews who are in Susa be allowed tomorrow also to do according to this day’s edict. And let the ten sons of Haman be hanged on the gallows.”

This kind of bloody directive is not what one would expect from the romanticized versions of the Queen Esther story. However, from a military perspective, it was a sound policy. It also had spiritual significance. If the king extended the decree an extra day, it would allow the Jews to completely destroy their enemies. The great hate this group held towards the Jews was evident in their willingness to go ahead with their plans in spite of the King’s new edict. Therefore, leaving the job undone would give room for the enemies of Israel to live to fight another day.

What may be a little more difficult for modern women to swallow, is her request to hang Haman’s sons. What was the purpose of hanging dead bodies? To incite fear. The Romans would leave crucified bodies on crosses as a warning so others would not rebel. Esther meant for the gruesome display of the bodies to have the same effect. This request made by Queen Esther demonstrates that she was far from fragile and willing to do what was necessary to protect her people.

The Parallels Between Queen Esther and the Persian Queen Amestris

Some scholars believe that the Persian Queen Amestris who lived in the fifth century BC was indeed Queen Esther. Likewise, they believe King Ahasuerus was the Persian King Xerxes, Amestris’ husband. Ancient Greek writings portray Amestris as shrewd and cruel.3 But the stories of Amestris were primarily written by contemporary Greeks who regarded the Persians as enemies. Their writings read more like propaganda rather than an actual true characterization of the Persians, including Amestris.4 In other words, Amestris may not have been cruel, but just a queen willing to make difficult decisions.

Knowing what we know about Esther in the Biblical record and her ability to use her position as a Queen to vanquish her enemies does lend to the idea that Amestris and Esther might have been one and the same. Esther was not a porcelain doll, but a fierce queen who used her position to serve God’s purposes.

Sometimes we will need to endure the crucible to become the person God needs us to be. Click To Tweet

The real Queen Esther story is a far cry from the Hallmark movie specials. Regardless, there are still lessons we can take away as Christian women on this side of the cross.

While I know many of my readers would much prefer the romanticized version of Queen Esther, it is more helpful to understand the true nature of her story. Very few of us would be able to truly relate to the romanticized version, but all of us can understand suffering and the need for grit in various phases of our lives. It is in our most difficult times that the true story of Esther can feed our souls. But don’t fret ladies. A Kingdom does await us…so we do get the happy ending after all.

The Legacy of Esther in Iran

Jael in the Bible: A Female Assassin

The Proverbs 31 Woman: A Woman of Valor